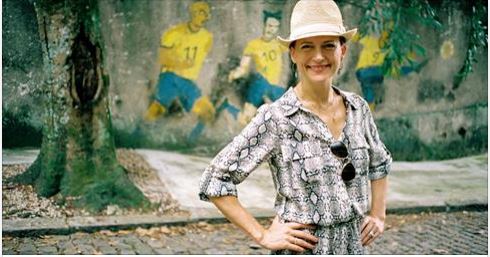 When it started, I thought Katie Derham’s BBC4 documentary was going to be yet another of those clichéd, sun-kissed strolls along the seafront. I was wrong. Derham – who has spent a lot of time in Brazil over the years – clearly has a genuine passion for the music, and she and her production team did an excellent job of weaving together the complex cultural and political history. In some ways, it was a video counterpart to Ruy Castro’s book (which is glimpsed in the background in one shot). Mônica Vasconcelos, Joyce Moreno and Paulo Jobim were among the guests adding expert commentary. All in all, one of the best music documentaries I’ve seen in a year or two. Bossa nova is one of the most maligned and misunderstood styles on the planet. After watching this documentary, only people with a tin ear will still think it’s elevator music.

(After writing that, I discovered that the Guardian’s TV reviewer describes the programme as “inoffensive” and “middle class”: “I love a bit of bossa as much as the next person, but by the end of the documentary, it had all become a bit too sophisticated and noodly.” And with that she probably went back to listening to Kylie Minogue or The Smiths again.  I despair sometimes.)