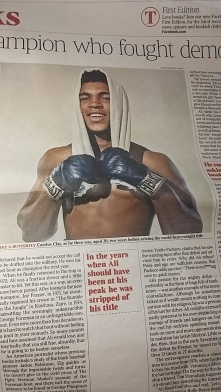 In The Times, my review of Jonathan Eig’s compelling, thoroughly researched biography of Muhammad Ali. Definitely a candidate for sports book of the year.

An American journalist whose previous books include a study of the black baseball pioneer Jackie Robinson, Eig guides us through the many improbable twists and turns. He doesn’t give us the vivid prose of The Fight, Norman Mailer’s account of the Foreman bout, and there isn’t the sense of intimacy to be found in George Plimpton’s encounters with The Greatest in his classic collection, Shadow Box. But Eig’s book is a crisper read that Thomas Hauser’s conscientious oral biography of 1991, even though it is roughly the same length. Above all, it delivers a portrait of a hero that does not ignore his all too human flaws. Along the way, Eig suggests that Ali may have suffered cognitive damage as early as the first of his three bludgeoning bouts against Frazier. The challenger’s ringside doctor, Ferdie Pacheco, claims that he saw the warning signs after that defeat and advised him to retire. Why did Ali refuse? Pride and ego are sufficient reasons. But Pacheco adds another: “There is no f***ing cure to quick money.”